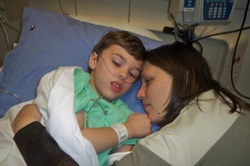 Epilepsy is a disorder of the brain that causes repetitive seizures over time.  Having one seizure is not Epilepsy.  Your brain has neurons that fire asynchronously, (not at the same time).  However, during a seizure your neurons fire together,  synchronously.  This abnormal sychronization of firing of neurons is what causes a seizure.

Have you ever witnessed a seizure? Some can be scary, others are totally unnoticeable.  There are almost 3 million people with epilepsy, and  10% of Americans will experience a seizure in their lifetime. There are two groups of seizure types: Generalized (grand mal) which simply means effecting all of the brain; and Partial seizures which simply effects a small area of the brain.  However, Complex Partial Seizures can lead  to Generalized seizures.

Absence Seizures- Individual blanks out and stares.  Usually does not remember the seizure, and returns to normal awareness after the seizure. Typically last less than 20 seconds.

Complex Absence Seizure- Change in muscle activity, could be rigid or relaxed.  May have rapid eye blinking. May make tasting movement of the mouth.  May rub fingers together "pinching". Can last over 20 seconds.

Atypical Absence Seizures- These are particularly hard to identify in that the person can be somewhat responsive, can manipulate objects, but are not "with you".  They stare off, may have eye blinking and may make tasting movements with their mouth.  These may not look like abnormal behavior, especially in children with developmental delay.

Myoclonic Seizures- These are brief jerks typically involving both sides of the body in a rapid muscle contraction and relaxation.  Typical areas of movement are in the arms, shoulders, neck and face.  However, there are syndromes in which myoclonic seizures will precipitate Tonic-Clonic seizures.  Caleb experienced this combination of seizures daily.

Tonic Seizures- These are a generalized seizure where there is complete flexion and stiffening of every muscle in the body.  The arms will raise above the torso, sometimes completly over the head.  Some times the contraction of the muscles push air out of the lungs with a distinct noise. If a child is awake when these occur they will fall. These usually last 20 seconds or less, however, they can last up to a minute.

Clonic Seizures- These are rhythmic movement sometimes on both sides of the body in which the muscles are contracting and relaxing that it appears in a jerking motion.  The length of these seizures vary.

Tonic-Clonic Seizures- These begin with the Tonic seizure, where the body stiffens, followed by the Clonic seizure with rapid jerking.  These seizures can last 1 to 3 minutes.

Gelastic Seizures- Are also known as laughing seizures. The laughter usually lasts less than one minute and is then followed by signs
that are more usually recognized with complex partial or focal seizures. Sometimes eye and head movement to one or the other side, automatisms
(such as lip-smacking, pinching or fidgeting of the hands) and altered awareness. The most common areas of the brain that involve gelastic seizures are the hypothalamus the temporal lobes and the frontal lobes.

Atonic Seizures- These seizures are the opposite so to say of a tonic seizure.  Instead of flexion, there is loss of muscle tone and the person may have their head to fall over, eyelids droop and if standing, they may fall to the ground.  These are known as "drop attacks".  The end result looks similar to a tonic seizure, so it is important to observe what is happening before the fall to be able to distinguish what type of seizure is taking place.  These usually last around 15 to 20 seconds.

Simple Partial seizures- These vary from person to person.

Complex Partial Seizures-These seizures start either in the temporal lobe or frontal lobe of the brain.Knowing what a seizure looks like is important.  Next the question is, when you see someone have a seizure, what do you do.


There are simple steps for Seizure First Aid for any kind of seizure:

These additional steps apply to someone having a generalized seizure:
Reasons to call for an ambulance:

There are many sites that give information, however there are posters from the Epilepsy Foundation that are very appropriate for the general population and are easy enough for children to even understand.  Please see links under the Resources tab.

There are some caregivers who are experienced to give emergency first aid medications to a patient who experiences prolonged seizures.  If you know someone who has Epilepsy and has breakthrough seizures, it is helpful for you to recieve training on administering DiaStat (rectal valium) if prescribed to the patient.

Our Caleb experienced a seizure at school one day, and before I could get to him, his teacher, whom I had trained in giving the DiaStat was able to administer it and it temporarily stopped his seizures.  There is a great deal of thanks I have to that teacher, who during a very difficult time for him, was able to help his seizure cease.  That alone is a blessing to a person experiencing a prolonged seizure.  Our Caleb continued to have breakthrough seizures that day, and was hospitalized.  However, many times, this procedure could stop a seizure all together to prevent a person from having to endure an ER visit.

The overall goal if for persons with Epilepsy to have the best quality of life possible.  If you know first aid for seizures, you will be calm if ever faced with helping someone through a seizure.  You can be a blessing to another.

People who have epilepsy need your support, encouragement and love.  Make sure that you enable them as much as possible to do everything they can do and help them to be successful.  One person can make a difference in the life of another, BE THE BLESSING.---Beth Baker